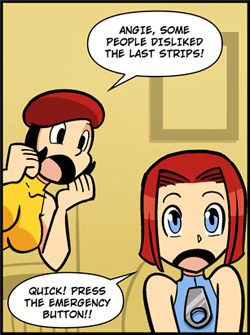 is a gaming webcomic by Josué "Jo" Pereira. Originally centering on the RED and BLU Teams' endless battle in Team Fortress 2, it later branched out to story arcs taking place in Left 4 Dead, StarCraft, or one-shot comics based on other games. The latter is now the comic's primary focus, featuring metagaming issues from whatever game Jo thinks is most controversial at the time. What sets it apart from its rivals is its art, which is animesque, dangerously cute, and somewhat inappropriate for a scenario involving two factions trying to murder each other. Initially the comic attempted to tell the story without any dialogue but later expanded to using more speech bubbles.

Recurring characters include the TF2 cast, expanded to include gender-swaps and chibi versions of several characters, the female BLU Engineer Engie-tan who plays and comments on games when off-the-clock and the Author Avatar, which takes the form of a purple tentacle. Be aware that the comic provides generous servings of fanservice occasionally, making it somewhat Not Safe for Work.

In a rework of the concept, the comic now revolves around five characters that originated as gender-swapped Team Fortress 2 classes living in one house. Engie-tan has become Angie, the overworked, sarcastic, reluctant team-mother. Demowoman became Morgan, obsessed with rules and saddled with playing the straight man to Jane (developed out the Soldier-Tan) who likes to play pranks. Alek (Heavy Weapons Gal) is a gentle giant while Anne-Marie (Spyette) is devious and self-obsessed.