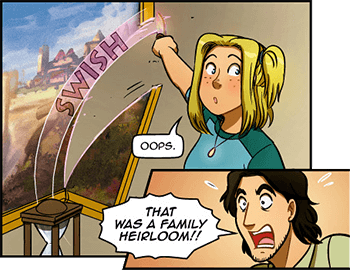 To err is human. Most people are aware of this, and recognize that we are all prone to the occasional act of clumsiness. Hence, when someone accidentally spills a drink, or steps on a foot, or knocks something over, most people are willing to forgive and forget if an apology is given.

This also means that people can, on occasion, do something generally mean-spirited to someone else in public, and potentially get away with it if it appears to have been a mistake. Of course, sometimes the person doing this wants everyone, particularly his or her victim, to know it was done very deliberately, and will communicate this by issuing an insincere or flat-out sarcastic apology.

Whether or not the character engaging in this behavior chooses to cover it with a sincere apology may depend on whether or not the character believes his or her audience will sympathize with the action. For example, if Alice is a particularly vicious and foul character who is not well liked, Charlene might choose to issue a sarcastic apology after dropping a plate of tartar sauce on her cleavage; her audience will smile because they all know that Alice had it coming, and they are pleased with Charlene's courage, knowing full well it wasn't really an accident. On the other hand, if Bob is a major Jerkass who is not especially well-liked, he may attempt a sincere apology after "accidentally" tripping the much kinder and sympathetic Charlie; he knows that those watching don't like him, and the apology works as a pre-emptive defense. Of course, if Bob is very powerful, he might decide not to put any effort into making the apology sound sincere since he really doesn't care what everybody thinks since there's nothing anybody can do about it.

This type of deliberate accident is often motivated by spite or revenge, although not always. Sometimes it's a necessity to divert someone's attention, gain someone's attention, plant a Tracking Device, steal something, or just get someone worked up. The key to this trope is that an action is being presented as a mistake on the part of the person doing it. Since there's no point in holding up such a pretense if alone, this is something that will be done in public, even if all that's available is an audience of one.

Usually, this action is more of an irritant than anything that's likely to cause serious injury or death, but not always.

Common variants of this trope include, but are not limited to:

See also: The "Be Quiet!" Nudge, in which a character punches or kicks someone and pretends it was an accident, in order to get the other character to stop talking. Compare Interrogation by Vandalism and Intentional Mess Making.

This trope bears no relation to the Sitcom Accidentally On Purpose.

Alternative Title(s): How Clumsy Of Me