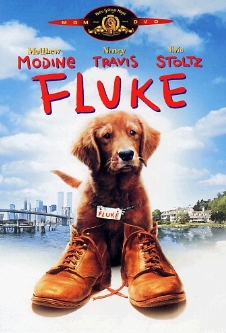 A little story about a stray puppy who lost his way and is now trying to find his family.

Fluke is a 1995 film about a dog named Fluke, who for most of his life remembers brief flashes of his other life, leading him to believe that in his past life he was actually a human named Tom with a family and a job. Upon finding his widowed wife and son, his memory intensifies as well as his suspicions, especially against his former business partner Jeff whom he believes caused his human death.