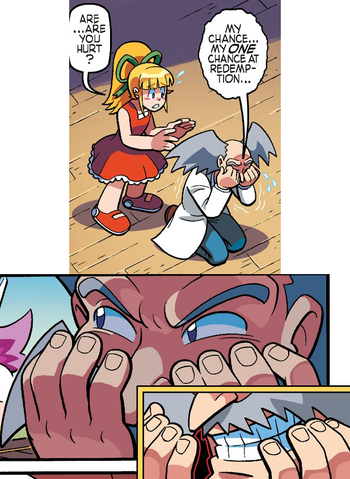 "Dudley began to cry loudly. In fact, he wasn't really crying — it had been years since he'd really cried — but he knew that if he screwed up his face and wailed, his mother would give him whatever he wanted."
— Harry Potter and the Philosopher's Stone

Many actors can be relied on for their facial expressions, their voices, their looks, muscle, hair, what have you. But to be able to cry on demand? That is a rare and powerful gift.

But the power to do so, without sincerity, in the hands of the Manipulative Bastard? Heaven help us all.

This trope gets its name because crocodiles can and do produce tears, but not out of emotion as humans do; it's simply a way of getting rid of excessive salt (something that many seabirds also do). 14th-century travel stories had it that they cried to draw in their prey, or as a false show of guilt or grief over the prey they were eating, and the usage has carried over to human displays of false tears over the years.

This trope is not limited to just the Manipulative Bastard, however. Children "crying" to get what they want is Truth in Television. (See #6 on the Cracked list Six Shockingly Evil Things Babies Are Capable Of.