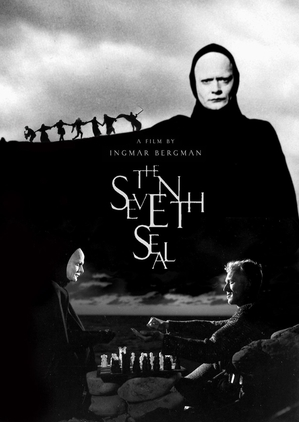 "I am death."
Jöns: Who will take care of that child? Is it the angels or God or Satan... Or just emptiness? Emptiness, Sire...
Block: It can't be so!
Advertisement:

The Seventh Seal (Det Sjunde Inseglet) is a classic Swedish film from director Ingmar Bergman, said to be his personal favorite of his own. The film is highly symbolic and explores many philosophical and existential concepts, including death and the meaning of life.

Antonius Block (Max von Sydow) is a knight returning from the Crusades with his squire Jöns (Gunnar Björnstrand). Death (Bengt Ekerot) appears to Antonius telling him his time has come. Antonius proposes that they play chess, and if he wins, Death will let him go. Antonius travels through the land to get back home during the breaks in the game and witnesses the effects of the black plague, while struggling with his doubts that there is a God or an afterlife and trying to find meaning in life.

Intended as a change of pace for Bergman after his successful comedies (like Smiles of a Summer Night), it unexpectedly became a Breakthrough Hit for him among international audiences, in many ways exemplifying the archetypal European art film. It's still probably his most famous film among the general public. It also launched Max von Sydow and Bibi Andersson into stardom.

Not to be confused with the Demi Moore Religious Horror movie The Seventh Sign (though both titles reference the same part of the Book of Revelation).