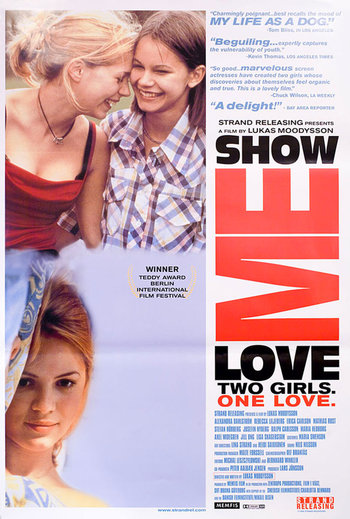 Fucking Åmål, a.k.a. Show Me Love, is one of the best-known films to come out of Sweden in recent years.
Advertisement:

The story concerns Agnes Ahlberg, a young lesbian who has recently moved to the sleepy Swedish town of Åmål with her family. Agnes goes to school in 9th grade, the last year before High School (locally known as "gymnasium"), where her only friend is a wheelchair-bound girl named Viktoria. But Agnes dreams of a better life and spends her days pining for the school's most popular girl, Elin Olsson.

When Agnes' parents decide to throw a sixteenth-birthday party without consulting her, Agnes invites only Viktoria, but Elin and her older sister Jessica crash the party, unbeknownst to Agnes. While there, Jessica dares Elin to kiss Agnes on the lips—and is revolted when Elin does so. Elin enjoys the kiss, but Agnes—who didn't know of the dare—is left feeling hurt and confused.

Elin soon starts to feel remorse, and decides to apologize. The two start to strike up a relationship, but Elin worries that Jessica won't accept her, and instead invents a romance with Unlucky Everydude Johan, best friend of Jessica's loser boyfriend Markus.

The movie is famous for having gone right up against Titanic (1997) in its native country, and sweeping the Guldbagges (the Swedish Academy Awards).