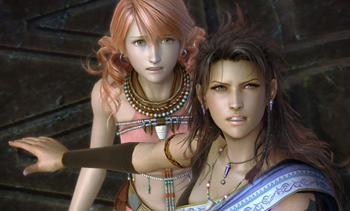 A pair of characters (either rivals, best friends, siblings, lovers, or an otherwise closely-related duo) are given contrasting hair colors to signify their opposing world-views. The hair colors are usually blond and black or dark brown, but it can just as well be red and black, or blond and blue — the important bit is the contrast. Their respective personalities are then typically defined as follows:

Of course, this isn't the only way the duo's contrasting personalities can be expressed. In Japanese Media, it is not uncommon to portray the blonde as a Western (especially American) Phenotype Stereotype or a delinquent with a wild streak—possessing frankness, openness, inventiveness, and ignorance of proper etiquette; while the brunette is a Proper Lady or gentleman, and is the more reserved, well-mannered, and manipulative of the two. It is also possible to invert the stereotype and have the fair-haired partner as the cool-headed and cynical one, and the dark-haired partner as the idealistic and cheerful one.

Contrast Betty and Veronica, which is about romantic rivals with opposite personalities and physical traits, while this trope is specifically about duos/couples, not Triang Relations.