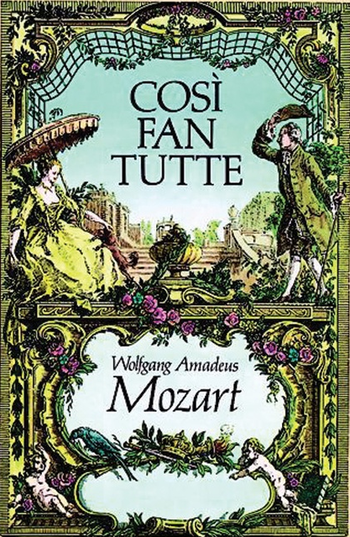 The third collaboration of one Wolfgang Amadeus Mozart and Lorenzo da Ponte, Così fan tutte (roughly translated as "Thus do all [women]" or, more idiomatically, "They [women] are all like that") is an opera buffa, with catchy tunes, a subverted Love Dodecahedron and a very Hard Truth Aesop by today's standards. The plot was allegedly based on a story told to the Austrian Emperor, who allegedly requested an opera based on it.
Advertisement:

Two young officers, Ferrando and Guiglielmo, boast the unending fidelity of their fiancees in a tavern. An old philosopher, Don Alfonso, bets them that he can get the girls to betray them for other men after just a day. Confident in the virtue of their beloveds, the pair agree. Their fiancees are two noble ladies called Fiordiligi and Dorabella, sisters and apparently completely infatuated with their lovers. Their happiness is crushed when they are told that the soldiers are being called away to war, perhaps to never return away. Their world-wise maid Despina advises them that men - especially soldiers - are hardly faithful and that women should pursue their pleasure just as freely, much to their horror.

Of course, all this is just a ruse. The soldiers disguise themselves as Albanians and return to woo the sisters. Alfonso, worried that the sharp-tongued Despina might recognize them anyway, decides to bribe her over to their side. He needn't bother, because Despina doesn't recognize them and even if she did, she would likely help for her own amusement. The sisters arrive to scold Despina, only for each of them to be wooed by the disguised fiancé of the other. Alfonso returns and quickly establishes that these two are his best friends.

Fiordiligi will have none of it, though, and sends them both away, which doesn't help much. Alfonso despairs that he may have found the rare breed of a constant woman, but Despina, tempted by the promise of cash, devises a plan; the 'Albanians' burst into the room where the sisters are mourning and threaten to kill themselves with arsenic. Once they do, a doctor (Despina in disguise) revives them with a magnet and they try once again to play on the sisters' sympathies.

In act two, Despina urges the sisters to do as they please. Dorabella is tempted and the sisters eventually agree that they can flirt, as long as they break it off the moment their fiances return. Unbeknownst to them, each chooses the fiance of the other as the man she'll allow to woo her. Eventually, both of them succumb to these overtures - Dorabella eagerly, Fiordiligi much later and only after a long and difficult aria about how she hopes her fiancé will forgive this 'folly of the heart' (and when Ferrando foils her plan to disguise herself as a man to follow Guiglielmo to war) - much to the shame and anger of their fiances. Don Alfonso, however, points out that women are naturally flirtatious and shouldn't be blamed; it's the men's fault for not being too appreciative and attentive to them.

The finale involves a double wedding with Despina disguised as the notary, with the soldiers 'returning' just as the Albanians rush off to hide. As this is an opera buffa, the girls realize they were tricked, but Alfonso shrugs off the guilt: "I deceived you, but undeceived your beloveds; now they will love you for who you are, not how they dreamed you up!" Even Despina feels some shame at her free-wheeling philosophy and the general happy ending comes along.