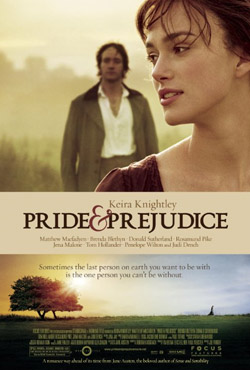 "Only the deepest love will persuade me into matrimony, which is why I will end up an old maid."
— Elizabeth Bennet
Advertisement:

The 2005 film adaptation of Pride and Prejudice was directed by Joe Wright. It deviates somewhat from the novel, including being set in an earlier time period (the turn of the 19th century, as opposed to the 1810s setting of the original) and emphasizes romanticism more than its source material.

Intelligent, lively Elizabeth Bennet (Keira Knightley) is the second of five daughters to a landed family in Hertfordshire. Since the Bennets have no sons, Mrs. Bennet (Brenda Blethyn) schemes for her daughters to marry well so they will be provided for, to the consternation of Mr. Bennet (Donald Sutherland). When the handsome, wealthy and eligible Mr. Charles Bingley (Simon Woods), his sister Caroline (Kelly Reilly) and their well-off friend Mr. Darcy (Matthew Macfadyen), lease a nearby estate, Mr. Bingley and eldest and loveliest Bennet daughter Jane (Rosamund Pike) hit it off, to the family's delight. However, misconceptions and judgements abound before everyone involved can find marital bliss.

Your Hands Are Cold

Elizabeth answers Darcy's second love confession by kissing his hand and touching foreheads with him against the rising sun.

Example of:
Headbutt of Love

Your Hands Are Cold

Elizabeth answers Darcy's second love confession by kissing his hand and touching foreheads with him against the rising sun.