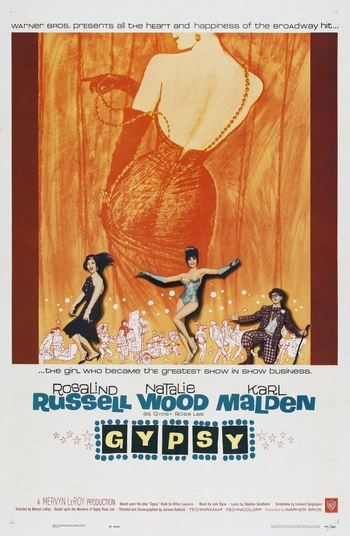 ♫ Let me entertain you, and we'll have a real good time! ♫
Advertisement:

Gypsy: a musical fable is a 1959 Musical with book by Arthur Laurents, music by Jule Styne, and lyrics by Stephen Sondheim, loosely based on the life of striptease artist Gypsy Rose Lee. The original production, starring Ethel Merman and Sandra Church, is one of the most acclaimed shows in Broadway history. It was later adapted into a 1962 film starring Rosalind Russell and Natalie Wood and a 1993 Made-for-TV Movie starring Bette Midler and Cynthia Gibb.

Stage Mom Rose Hovick is determined to make her daughters Louise and June stars — June more so than Louise initially — but while June is extroverted and talented, Louise is shy and quiet. Rose's act for the two is based on childish, innocent stage personae that they become unable to keep up as they grow older.

Eventually, June runs away, and Rose decides to put Louise in the spotlight, with an act still similar to the one with June. But there are various problems: Louise is a good singer and dancer but she can't do the kind of routines that June excelled at, Rose's ideas for acts to get Louise in the spotlight are too old fashioned and out of date to work in the changing entertainment landscape, and her relationship with her lover, manager and business partner Herbie are deteriorating due to Rose's ruthless, uncompromising ambition. On top of all that Vaudeville has died out save for the Burlesque theaters, and the only reason the show was even taken on was that it would be a clean act, giving less of an excuse for police raids.

Yet that doesn't last long, and the act is finally broken up. Rose pushes Louise to do one last act for an arrested stripper — causing Herbie to finally leave her for good — but insists that Louise do it clean. "Make 'em beg for more, and then don't give it to them!" Louise, now given the stage name Gypsy Rose Lee, takes that advice to its logical extreme, by always leaving the men wanting more of her. This makes her the most successful in the business, but her mother is disgusted.

Finally realizing she lost everyone, Rose breaks down and realizes that everything she did was for herself and out of her own selfish desire to be noticed. Upon admitting that, Rose and Gypsy start to reconcile.

The film is also notable for inspiring The Faith Dane Clause, to prevent the legal problems that Faith Dane created when she claimed that her acting style "created" the role of Miss Mazeppa. All actors must sign a waiver now relinquishing claims on the characters they play since.