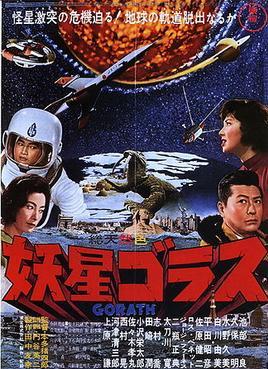 Gorath (Yosei Gorasu, or Calamity Star Gorath) is a 1962 science-fiction disaster film from Toho Studios produced by many of the same minds behind Godzilla, Rodan, and Mothra, like director Ishir⁠ō Honda, producer Tomoyuki Tanaka, and special effects director Eiji Tsuburaya. The film's script was written by Jojiro Okami, a former Japanese Air Force pilot who also gave the original ideas to The Mysterians, Battle in Outer Space, and Dogora.

In 1982, astronauts have made a startling discovery: an enormous rogue planet called Gorath is hurtling through the Solar System directly towards Earth, threatening to engulf our world with its gigantic gravitational field. With two separate space expeditions to study Gorath having fallen victim to the rogue planet's immensity, the world's nations band together to avert global catastrophe. Since destroying Gorath is certainly out of the question, the United Nations requests a team of the world's leading scientists to conduct a truly preposterous endeavour - install enormous rocket thrusters at the South Pole to push Earth safely out of Gorath's way. With precious time running low for humanity, the fate of the world rests upon the seemingly impossible task of moving Earth away from Gorath before it is too late.