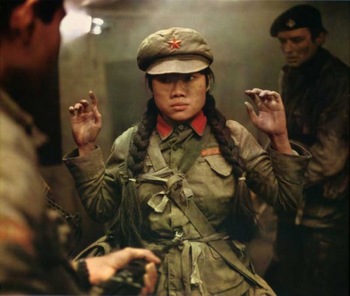 The Gladiators is a 1969 Science Fiction movie, shot and produced in Sweden and directed by Englishman Peter Watkins (of The War Game fame.) In the near future, no country is still in the possession of a standing army. Instead, when conflict arises, highly trained commando groups are pitted against each other in what is called "the international peace games": a sort of gladiatorial games held in the neutral countries, and broadcast as TV-entertainment for the masses to enjoy.

In practice "the international peace games" consist of the two multinational teams competing on a hi-tech obstacle course, where the main objective is to follow a string of colored lights to the exit. "Yellow" means longer but safer and "red" means shorter but deadlier. This, year the games are held in Stockholm, Sweden, and pits a group of American, British, French and South Vietnamese soldiers against a group of Chinese red guards. To shake things up a bit, the western team is also assigned a non-combatant member: a French student and anti-war activist who is doing everything in his power to undermine the game and destroy ICARUS: the Master Computer from which the peace games are run.

Not to be confused with the 2001 Ridley Scott film Gladiator. Or the game show.