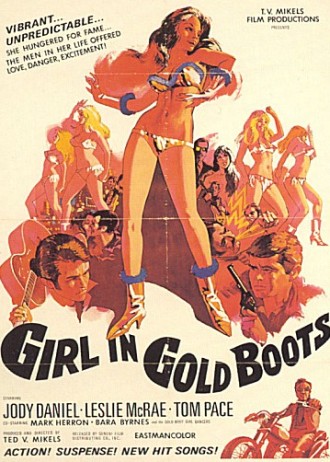 Michele, a young woman who works at a dead-end job at a diner in the middle of nowhere, meets an obviously untrustworthy man named Buz who tries to convince her to go with him to Los Angeles. He claims to have connections that can land her a job as a Go-Go dancer where his sister works. While Michele initially distrusts him, a spat with her abusive alcoholic father leads her to take Buz up on his offer of a roadtrip. The two head to L.A., eventually picking up a handsome hitchhiker called Critter, who also writes songs and plays on his guitar in his spare time. While Michele initially shows attraction to Buz, she rapidly develops feelings for Critter, causing friction between the violent Buz and the peaceful Critter. Once in Los Angeles, the trio arrive at a Go-Go club called the Haunted House where Buz's sister Joan is the leading act. Joan initially takes Michele in as a protege, while her beau/boss Leo brings Critter on as a janitor and Buz on as a drug dealer. After Michele begins to steal Joan's spotlight and becomes a greater and greater attraction, the glittery world of the Go-Go club takes its toll on the lead characters.

Nearly half of the songs in this music-laden movie, including the title song, were written by singer-songwriter and sound engineer Chris Howard, who appears as himself and is backed by a band called "The Third World" in the credits (not to be confused with the famous reggae band Third World). One scene features bongo player Preston Epps, who had achieved some fame a decade earlier with his 1959 pop hit, "Bongo Rock." In fact, Epps is listed in the opening credits as "that Bongo Rock man." Another notable band member at the club in L.A. is Donald "Duck" Dunn, later of The Blues Brothers, on bass guitar.

Girl in Gold Boots was featured as a Season 10 episode of Mystery Science Theater 3000. Thanks to the more lenient approach of the network to the show's movie selections in the final season, it was one of the few Sci-Fi era episodes to not feature any elements of science fiction, fantasy, or horror.

Apparent skips in the print used in the television program led to some amusing continuity problems, including a scene in a diner in which Buz suddenly appears in his seat next to Michele and Critter as if he teleports in during their conversation. One DVD release (from MMI Image Entertainment, using a print from Geneni Film Distributing Company), shows the scene without the "teleport" skip but has its own continuity breaks, suggesting two different prints from the original film were used.