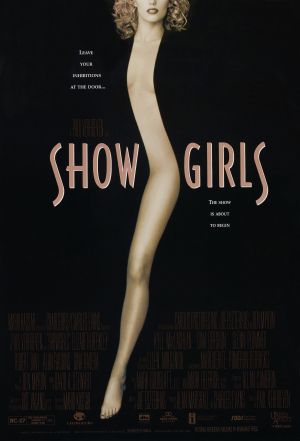 Leave your inhibitions at the door.
The show is about to begin.
"You are a whore, darlin'... We all are. We take the cash, we cash the check, we show 'em what they wanna see."
— Cristal Connors
Advertisement:

Showgirls is a 1995 sexploitation film written by Joe Eszterhas and directed by Paul Verhoeven. It is also the only movie to receive a wide release under the NC-17 rating.

This tale of the lives of Las Vegas strippers, set to the plots of 42nd Street and All About Eve, may have also been partially responsible for the rating's decline, as it was basically an X-rated movie that went through the ratings process (which actually isn't required for an X rating; anyone wanting to make an X-rated movie can gladly release it as such on their own). That said, when compared to the explicitness of today's cable television series, even the unrated version of this movie would barely qualify for an R rating today.

The film tells the tale of Nomi Malone (Elizabeth Berkley), a country girl who hitchhikes to Las Vegas in hopes of becoming "a dancer" and eventually (after a lot of nudity, a lot of sleaze, a little violence, and a lot of choreographed dance numbers) making her way to the top.

Showgirls was — and still is — a rather controversial film. It flopped at the box office, which killed the chances of future NC-17 movies getting wide releases. However, it attracted a cult following on home video, chiefly as a "guilty pleasure" film infamous for its excessive sex, even more excessive nudity, and hilariously inane story and dialogue. By contrast, take a look at the 1967 film, Blowup, which took the opportunity to deal the final knockout blow to The Hays Code and didn't foul it up by becoming a hailed film classic.

, focused on the minor character Penny, played by Rena Riffel (who also wrote, produced, edited, and directed the film) was released direct-to-video in 2011.

"Man, everybody got AIDS and shit."