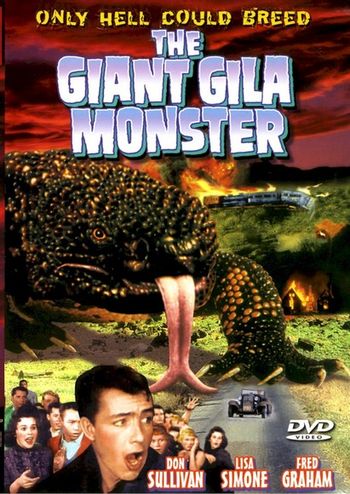 The Giant Gila Monster is 1959 giant monster movie directed by Ray Kellogg (as part of a double-feature with The Killer Shrews).

In the backwoods of northern Texas, in a car overlooking a ravine, a young local couple may be scheming to elope and marry when a claw pushes their car over the edge to their deaths. Back in town, at the teen hangout, the couple's friends wonder where they are, and hot rod enthusiast Chase Winstead (Don Sullivan) teams up with the sheriff to go and find them. Sure enough, it transpires that the eponymous beastie is lurking about, and is gradually making its way towards the town.

This movie had the potential to be a campy narm-fest, alas; too little is seen of the big lizard wreaking destruction. It's seen on-screen for only about eight minutes of the film's 74 minute running time. All the rest is seemingly taken up with characters talking about where the couple might have disappeared, hot rods, and Chase playing/teens dancing to cheesy guitar music. The scenes of the lizard playing with toy cars on a miniature set are pretty good though.