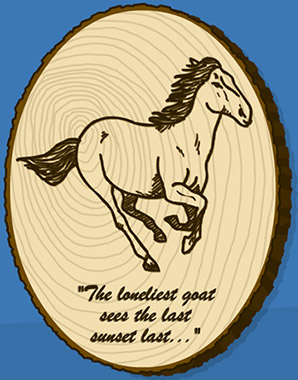 Something that looks like a Koan (a Chinese Buddhist riddle meant to encourage contemplation), walks like a koan, quacks like a koan, but lacks… substance. It sounds meaningful at first, but after you think a moment, instead of getting some rush of insight, you realize that it is nothing more than nonsense, or just a joke dressed up in profundity's hand-me-downs. Like ice cream itself, it looks good and tastes good, but is ultimately just empty calories.

If done savvily enough, is indeed a form of Truth in Television—the point of a Zen koan (literally "Public Case", a story), is to show that contradiction is actually a delusion, and help the student let go of the mental habit of arranging things into dichotomies (because both extremes, despite their apparent contradiction, are actually one thing). The Trope Namer above is one such example, despite containing an incredibly obvious pun.note Both cases are the same, wherein I give you ice cream: in the second case, I take away your lack of ice cream by giving you ice cream.

Taken to the extreme (and stretched out), this becomes a full-fledged Word Salad Philosophy. If used as part of The Summation, can venture into Fauxlosophic Narration. If the koan is attributed to a certain ancient Chinese philosopher, it's Confucian Confusion.

Compare Mistaken for Profound, Fauxlosophic Narration, Seemingly Profound Fool, When Is Purple, Metaphorgotten, Mind Screw. Compare and contrast "Shaggy Frog" Story. Contrast Proverbial Wisdom. For when the words are meant to make sense, see Meaningless Meaningful Words. Related to True Art Is Incomprehensible. Has nothing to do with actual Ice Cream, Sailor Moon Character or the absolute angel. Might be confused with the famous Confucian sayings (which are also Chinese, but not Buddhist), which tend to be recited in You No Take Candle English.

Turns out he was referring to some 200 years into the future where Grim is still subservient to future incarnations of Billy and Mandy.

In an episode that takes numerous potshots at Apple and their products, the ad for Bobert is filled with nonsense.

In an episode that takes numerous potshots at Apple and their products, the ad for Bobert is filled with nonsense.