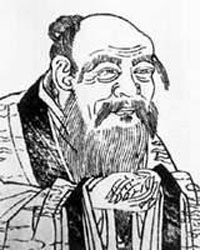 The Tao which can be explained is not the true Tao.
— Daodejing
I know how birds can fly, fishes swim, and animals run. The runner may be snared, the swimmer hooked, and the flyer shot by the arrow. But there is the dragon: I cannot tell how he mounts on the wind through the clouds, and rises to heaven. Today I have seen Lao-tzu, and can only compare him to the dragon.
— Confucius (attributed)
Advertisement:

Laozi (older transliterations include Lao Tse, Lao-Tsu) was a Chinese philosopher, the author of Daodejing (Tao Te Ching), which, tradition says, he wrote while going into exile, at the request of one of the guards of the kingdom, and which is the central document of Daoism (Taoism).

As the quote shows, Daoism was big on The Only Way They Will Learn. Heavily favoring peace and quietness, the ideal ruler (or Reasonable Authority Figure) will lead people into peace and prosperity so gently that they are unaware of his existence; a king the people proclaim is good is only second best. Politically-minded readers will recognise this as one of the earliest forms of what later became known as free-market 'Classical Liberalism', with many Chinese states after Laozi ruling with a very 'light' touch (few taxes, little bureaucracy, etcetc). The work is also sometimes considered the Ur-Example or Trope Maker for anarchism, although Laozi did not call himself an anarchist (the term hadn't been invented yet). Many men have cited him as the reason why they prefer Home Sweet Home to the dangers of the Decadent Court.

Traditionally, he is said to have lived from 600 BC to 470 BC, contemporaneously with Confucius (hence the page quote); historians generally think he either is a mythic figure, with the Daodejing actually being a compilation, or actually lived during the Warring States period in 4th century BC.

A note on the name: Laozi (老子) is an honorific title that literally translates as "Old Master". His personal name is Li Er (李耳), his courtesy name is Boyang (trad. 伯陽, simp. 伯阳), and his posthumous name is Li Dan (李聃).