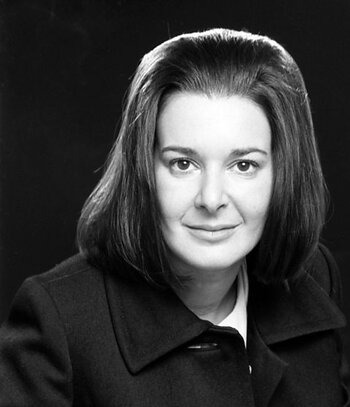 "I gave myself a year to either move out of being a production assistant, or move out of television altogether."
On trying to become a television director in The '60s
Advertisement:

Verity Ann Lambert OBE (27 November 1935 – 22 November 2007) was a British producer, heavily influential in the creation of Doctor Who along with Sydney Newman. She was notably both the youngest and only female producer in The BBC's drama department at the time. Following Doctor Who she worked on several other well known series, including Rumpole of the Bailey and three series of Jonathan Creek. In the latter part of her career she launched her own production company, Cinema Verity.

She lived long enough to see Doctor Who revived in 2005 and was delighted to see her creation back on screen as can be read here.

The story of how Doctor Who itself got created was told in the docudrama An Adventure in Space and Time, which starred (among other people) Jessica Raine as Lambert.

Shows produced or executive-produced by Verity Lambert with their own trope pages include: