Film / An Adventure in Space and Time 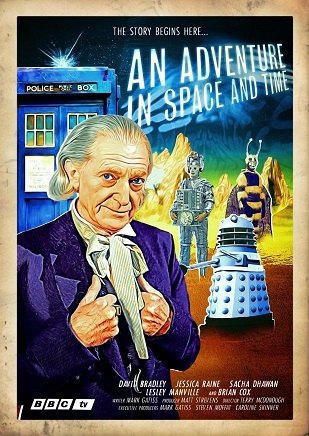 We want to do a Science Fiction series. The legitimate stuff though — no tin robots or BEM... Bug-Eyed Monsters! You know... mutations and death rays, brains in glass jars, that kind of crap. We will run all year long. So a good-looking guy, a good-looking girl and a kid who gets herself into all kinds of trouble. Plus an older man. Quirky. I'll come back to him.
— Sydney Newman
Advertisement:

The one where it all began... behind the scenes.

An Adventure in Space and Time is a ninety minute docudrama about the creation of Doctor Who, and more broadly about the First Doctor's era, headed up by Mark Gatiss in celebration of the fiftieth anniversary of the show's existence. It premiered on BBC2 on November 21st 2013.

Much acclaim was given to David Bradley's performance as Hartnell. Many viewers noted that with the makeup, David Bradley looked uncannily like the First Doctor. He made such an impression that he was tapped to play the First Doctor in the series proper for the 2017 Christmas Special, the final part of the Grand Finale for Peter Capaldi's Twelfth Doctor, making him the third such actor to play One (after Hartnell himself and Richard Hurndall, both of whom were long dead). David Bradley, Claudia Grant, Jemma Powell and Jamie Glover (who played Carole Ann Ford, Jacqueline Hill and William Russell) also appear in a series of First Doctor stories produced by Big Finish.