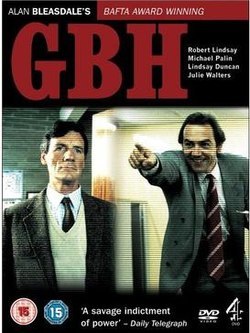 G.B.H. is a drama by Alan Bleasdale that was first shown on British TV in 1991. It has elements both of British Conspiracy Thriller and psychological drama, as well as pure comedy and farce. The plot concerns Michael Murray (Robert Lindsay), the charismatic and far-left leader of an unspecified northern city council who, as a show of strength against the then Conservative government, calls a one-day strike of all council services, except that a Special Needs school is accidentally not picketed. The headmaster, Jim Nelson (Michael Palin) is then asked to apologise for turning up to work as usual. He refuses, causing him to be a target for Michael Murray's thuggish supporters. The rest of the series concerns the conflict between the two men as well as their own psychological battles; Michael Murray, in particular, is haunted by a traumatic incident from his childhood. Gradually, it is revealed that both men are merely pawns in a game designed by the British Establishment to discredit the Left.

Oh, and by the way, the title refers not to Grievous Bodily Harm, but The Great British Holiday (a good proportion of the series takes place at an awful holiday camp).