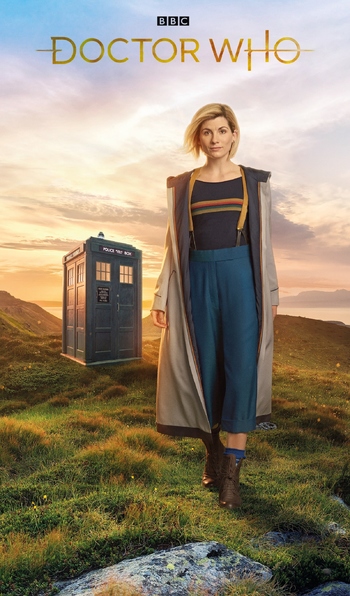 "Next stop... everywhere."note Pictured: The Thirteenth Doctor and her TARDIS. Not pictured: over twelve other Doctors, the various companions, enemies, allies...
"It all started out as a mild curiosity in a junkyard, and now it's turned out to be quite a great spirit of adventure."
— The First Doctor, "The Sensorites"
Advertisement:

Doctor Who is a British television institution, and the longest-running science-fiction series in the world, first airing on BBC TV on 23 November 1963. Created by Canadian television producer Sydney Newman, it takes place in and established the Whoniverse, which has a continuous and constantly adapting story involving many different timelines, and also spawned the truly vast Doctor Who Expanded Universe.

The premise of the show is (somewhat) simple enough: it follows the adventures of a humanoid alien — the Doctor — and their various companions through time and space. The Doctor is a renegade of sorts, having left their home planet of Gallifrey, and travels around the universe in a living and sentient time machine, the TARDIS (Time And Relative Dimensions In Space), and meets many foes, ranging from heavily armoured robots to killer microbes to members of the Doctor's own race, the Time Lords.

Part of the longevity of the series is that when the actor playing the Doctor leaves, the show gets around this by killing the character off, only to "regenerate" the Doctor into a new form played by someone else . As a result, the character has appeared in the series from the beginning, but their new personality and new tastes give the show a distinctly different atmosphere with each regeneration, leading the producers (and, often, fans) to treat the introduction of a new Doctor as a soft relaunch of the series. The show also frequently changes companions — over its history, only a relative handful have ever actually stayed longer than one or two seasons — and once again the change in companion is also treated as something of a relaunch, especially in the 2005-present era, where the stories are more frequently told from their perspective.

The show originally ran from 1963 to 1989 (with an 18-month hiatus in 1985-6 caused by Executive Meddling, during which it "rested" and saw only a radio drama air), before being pulled from the airwaves after the conclusion of its 26th season; the BBC has always insisted that the show was merely placed on hiatus, but the general understanding is that it had actually been cancelled. In the "Wilderness Years" when Doctor Who was off the air (1990-2004), independent productions ranging from direct-to-video companion adventures minus the Doctor, stories about monsters from the series, spoofs, In Name Only stories featuring former Doctors on the show, licence-restricted stories featuring no familiar characters from the series, audio releases, and anniversary specials technically kept the franchise alive.

A Made-for-TV Movie aired in 1996, in which the Seventh Doctor returned at the end of his life and regenerated into the Eighth. This was created as a pilot for an American-led revival, but although the Eighth Doctor became part of the continuity as a whole, no actual return of the series resulted due to the film's poor ratings in the United States (it was, however, a success in the UK). Throughout the remainder of the decade, The BBC made attempts to relaunch the series as a theatrical film, to no avail, and between 2001 and 2003 produced a series of webcasts which it considered in every way an official continuation of the series (insofar as the Beeb ever indicates what is and isn't canon). It is possible more would have been made, but a very exciting development on the television front was made in 2005, as the BBC regenerated the show.

This new "Revival Series" is a direct continuation of the 1963-1989 "Classic Series", rather than being a Continuity Reboot, and the first Doctor depicted here, the Ninth Doctor, was a successor to the previous eight incarnations. The Revival Series has radically upgraded production values (the original series is notorious for its often rubbery monster prosthetics and bad Chroma Key), shorter story arcs but much more continuity throughout, and deeper Character Development and romance to the series than what the first 24 seasons depicted.note Deeper character exploration began with Seasons 25 & 26, but the Revival Series is where this greater elaboration really started kicking in. As such, 2013 marked the show's 50th anniversary. The original show lasted 26 "seasons", whereas the new annual runs of episodes are called "series": officially, the show went from Season 26 to Series 1, and so on; despite this, it's important to note, once again, that the Revival Series is still very much a continuation of the Classic Series, though it doesn't rely on viewer familiarity of the show's continuity with its predecessor, allowing it to remain accessible to newcomers as well as to longtime fans. Even subtracting the 16-year "interregnum", the show still holds the record of longest-running English-language sci-fi series, with its nearest rival being the 12-season run of fellow UK series Red Dwarf.

Doctor Who is a British institution and considered a key part of British culture: even The Queen herself is a fan, and threw the show a birthday party in her palace for its 50th anniversary in 2013. It is also notable that Michael Grade, the BBC Controller when the show originally went off the air in 1989 and a vocal critic of the classic series (thus leading him to be the one most commonly blamed for cancelling Doctor Who), is the only BBC Controller not to have received a knighthood — entirely coincidentally, we're sure.note Normally, we Brits and the Queen are above pettiness. In this case... well... In addition, the Royal Mail honoured the show's anniversary with a set of stamps, one for each Doctor (and the TARDIS) plus the show's villains.

It's also worth noting that a significant amount of the show's appeal lies in its remarkable ability to veer between being a genuine masterpiece of British television to being some of the most ridiculous buffoonery ever put onto BBC airwaves — oftentimes within the same episode. This is especially true for the first 26 seasons, whose far lower budget and constrained shooting schedules could lend to some particularly amusing blunders in terms of effects, acting, writing, set design, etc. That's not to say that the Revival Series doesn't have its share of snark-worthy moments, but the Classic Series is where it's most prominent. Again though, taking amusement in its less stellar moments is part of the appeal, especially for hardcore fans — to the point where you could describe Doctor Who as "Narm Charm: The Show" — and as such you can find a good amount of ribbing on this wiki's various pages regarding Doctor Who, done by fans, for fans, and all in good fun.

, devoted to restoring and remastering vintage episodes to as much of their former glory as possible, as well as doing some additional touch-ups to amend some of the... less graceful moments. In the process, they have pioneered a number of brand new restoration techniques, such as Reverse Standards Conversion (recovering PAL footage from NTSC copy), Chroma Dot Colour Recovery (using leftover dots to recolour a black and white copy) and Vid FIRE (increasing the frame rate of a film copy to that of the original video), which have since also been applied to other vintage TV shows. Until 1978, the BBC had a policy of junking episodes they thought they no longer needed; as a result, the master tapes for many episodes that aired from 1964 to as late as 1974 were in fact demagnetized for later reuse. Since 1978, a concerted effort by fans and the BBC itself has resulted in many episodes being recovered, as recently as 2013. At present, 97 of the 253 episodes from the 1960s remain missing from the BBC archives, though it is widely speculated that a number of episodes have been located. Fortunately, audio recordings survive of all the missing episodes, and all of the incomplete or missing storylines have also been adapted as novels over the years. In more recent years, the BBC has even commissioned animated re-creations of missing episodes for DVD release, making use of reference photographs and utilizing the audio recordings.

The show has spawned several spinoffs within its canon Whoniverse, which have occasionally crossed over with the main series. Except where noted, these take place in (then-)present-day Earth.

There are additionally many adventures in almost all types of media, often made by the cast and crew of the TV series, which freely contradict each other. Collectively, these are known as the Doctor Who Expanded Universe. (The BBC rarely comments on their, or for that matter the TV series', canonicity, causing a fair amount of debate and Epileptic Trees.) Stories outside the TV series tend to be Darker and Edgier, and often tackle themes that the TV series can't dive into for any reason, as well as story ideas that were proposed but simply never developed for television. Quite a few stories from the Expanded Universe ended up referenced in or even adapted for the revived TV series.

The series also had three behind-the-scenes Companion Shows. The longest-running was Doctor Who Confidential which debuted in 2005 and was cancelled in 2011 due to budget cuts (a scaled-down version called Behind the Lens has since been featured on DVD releases), and Totally Doctor Who, a kid-friendly version of Confidential that aired two seasons from 2006 to 2007, the latter of which featured an exclusive animated serial titled The Infinite Quest. In 2014, the BBC launched a scaled-down version of Confidential titled Doctor Who Extra.

I am the Doctor, and you are the tropers:

Recurring examples (that don't fit in one of the three categories listed above):