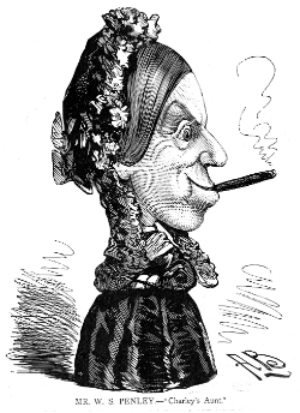 "Hello, I'm Charley's aunt from Brazil. Where the nuts come from."
Advertisement:

Charley's Aunt is a three-act farce that, when it premiered in 1892, was so wildly successful that it shattered theater records at the time, becoming the longest-running play with well over a thousand performances in London, a Broadway version, and an international tour.

It concerns two Oxford students, Jack and the eponymous Charley, who are in love with Kitty and Amy, respectively. The two girls happen to be friends (Amy's uncle, Stephen Spettigue, is Kitty's guardian), and plan to leave for Scotland the next morning. The boys, however, want to have a private moment in which to confess their love, but they can't possibly invite the girls to their rooms alone, out of concern for the girls' reputation. They need a chaperone. Luckily, Charley is expecting his aunt Donna Lucia d'Alvadorez: the rich widow of a Brazilian millionaire, who has financed his education but never met him in person.

At the last minute, however, Donna Lucia sends a telegram saying she is delayed on business. The girls are arriving soon and they will have no chaperone. They do, however, have their friend Lord Fancourt Babberly, who just so happens to be in an amateur theatre production playing an old woman...

The play has been adapted to the screen numerous times, most famously as a 1941 film starring Jack Benny as Babberly. Later adapted as The Musical Where's Charley?.

Unexpectedly, the 1975 USSR film "Hello, I'm your aunt" (a loose adaptation bordering on a tele-play) became a hit and remains a fan favorite to this day.