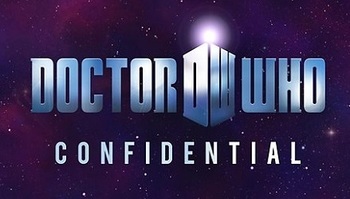 A Companion Show to Doctor Who, with a behind-the-scenes look at the making of the show. It has aired since the show was brought back in 2005 until the end of the sixth series in 2011.
Advertisement:

In the UK, it aired on the digital channel BBC Three immediately, or soon, after Doctor Who. Everywhere else in the world is lucky if they get to see it at all. Notoriously, the DVD Bonus Content has only "Confidential Cut-Downs" - hacked up episodes, reducing the original 45-minute exploration of the latest episode to 10 minutes (due to a mixture of licensing issues often relating to episode footage and music, and the logistics of releasing a series of equal length to the original series, thereby doubling the cost of producing already-expensive DVD and Blu-ray sets). This strategy is also used for repeats of Confidential episodes, so you need to catch it when it airs or Keep Circulating the Tapes.

When it first aired, it used a lot of clips from the BBC's Doctor Who archives (well, the bits they haven't wiped). Later, it was a mix of being a Clip Show version of the episode you just watched and talking heads gushing about the show, the characters, the writing, and how amazing it all is. However, as the writers were often talking here, it was fertile ground for listening to the Word of God, or a frustratingly enigmatic Shrug of God at least. Arguably the most popular aspects of the series were those episodes that showed the actors having fun behind the scenes, or the producers did something different, like allowing David Tennant to host and direct one episode and having Karen Gillan and Arthur Darvill live out their personal fantasies in another. Occasional episodes also provided glimpses at bloopers and other outtakes.

In the United States, Sci Fi Channel never imported the show, but when the show moved entirely over to BBC America, 2-minute segments from the corresponding Confidential episode and played during one of the commercial breaks during episodes of Series 5. When PBS began airing the revived series, many stations also began airing Doctor Who Confidential alongside.

Although criticized by some, Doctor Who Confidential (alongside the masses of documentaries produced for classic-series episodes) helped make Doctor Who the most-covered TV series ever and led to its own spin-offs Totally Doctor Who (a series aimed at kids) and Torchwood Declassified, as well as inspiring other series such as Merlin to do their own. In 2012, although the series is officially cancelled, it was announced the Confidential production team was producing behind-the-scenes material for the BBC's Doctor Who website.