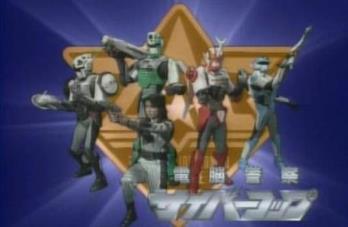 Dennou Keisatsu Cybercop (lit. Computer Police Cybercop) is a Toku series produced by Toho in 1988, which chronicles the missions of the Zero-Section Armed Constable (ZAC), a special police unit assigned to assist the standard police force in a crime-infested Tokyo in 1999. Battling the criminal organization DeathTrap, a group of elite ZAC officers wears high-tech armors called Bit Suits, which confer them superhuman capabilities. They are soon joined by Shin'ya Takeda, a stranger from the 23rd Century who, strangely enough, has his own Bit Suit, and learn that their actions in the present can help reshape for better the apocalyptic future from which Takeda came.

The rest of the ZAC crew: