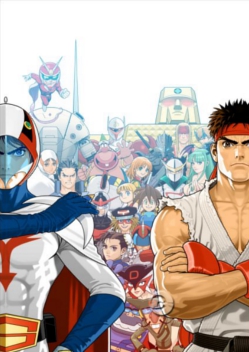 It Came "Across the Border."

Sometime in 2008, Capcom decided to make a return to the gameplay of the Marvel vs. Capcom series, except that they had no idea which company they should crossover with, until anime studio Tatsunoko Production phoned them in and asked them to make a Licensed Game based on their characters. Naturally, Capcom agreed... and merged the request with their own plans, thus resulting in Tatsunoko vs. Capcom: Cross Generations of Heroes, developed by 8ing (otherwise known for the Bloody Roar and Naruto: Clash of Ninja series).

Initially starring Ken the Eagle, Jun the Swan, Casshern, Tekkaman, Yatterman-1 and his stripperiffic nemesis Doronjo, Hurricane Polymar, Karas and Gold Lightan on the Tatsunoko side; (plus Hakushon Daimaou and Ippatsuman for the Wii version) and Ryu, Chun-Li, Alex, Batsu, Morrigan, Soki, MegaMan Volnutt, Roll (with a completely different moveset from her Marvel self) and the PTX-40A Vital Suit from Lost Planet representing Capcom (plus Saki, from Quiz Nanairo Dreams (better known as an Assist Character in Marvel vs. Capcom), and Viewtiful Joe in the Wii version, and the Big Bad of Ōkami as the game's boss in both the Arcade and Wii versions, for bonus fanservice), the game marks a return to the series' roots of frenetic two-on-two tag-team action—but with 3D graphics (though the game still plays on a 2D plane) and the combos ramped up big time. New mechanics introduced include the Mega Crash, which is akin to Guilty Gear's Burst (although the term itself originated from Capcom's Pocket Fighter; the mechanics and cost are essentially the same) and Baroque, which allows you to sacrifice your red life to cancel your current attack and gain a proportional, temporary power boost. The story is even more non-existent and laid out to you by the anime intro sequence (provided by Tatsunoko, of course): the characters all live in a TV show and only exist to (surprise, surprise) beat the stinking crap out of each other.

On January 26, 2010, an Updated Re-release to the game, entitled Tatsunoko vs. Capcom: Ultimate All-Stars, was released in North America, with an international release on January 29th. Among the changes are the addition of online play, character balance tweaks, the removal of Hakushon Daimaoh (because his European licensors were quite stingy regarding him), still-frame endings done by UDON Comics rather than the animated ones from Tatsunoko (due to licensing issues; those outside of Japan were not happy about that) and the addition of five new characters: Tekkaman Blade, Joe the Condor and Yatterman-2 on the Tatsunoko side, and Frank West and Zero on the Capcom side. The plot has also been updated. Why the heroes have to fight in order to defeat the Big Bad is still unknown.

The home port is exclusive to the Wii, because the arcade machine used Wii-based hardware.

compiled their stories and the Tatsunoko characters' anime intros.

These two games have a character sheet.

Tropes associated with these games: