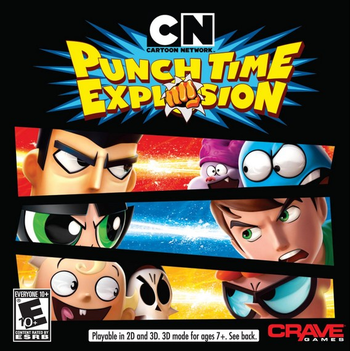 Cartoon Network: Punch Time Explosion is a Platform Fighter and Mascot Fighter game developed by Papaya Studio, published by Crave Entertainment, and featuring Cartoon Network characters, a la Super Smash Bros.. The Nintendo 3DS version (released a few months before the console versions) features 18 playable characters, with 19 others acting as assists. The console versions have the 3DS version's roster, plus eight more for a total of twenty-six (four of them were formerly assist characters, two were bosses) and added six new assists for a total of twenty-one assist characters.

This game features content from the following Cartoon Network shows (an asterisk labels characters and series introduced in XL):

The official website no longer exists, but the Wiki for the game can be found here

. Compare with Nickelodeon All-Star Brawl, another fighting game with a similar concept. See also Multi Versus, Warner Bros.' later attempt at a crossover platform fighter that features Cartoon Network characters (among others).