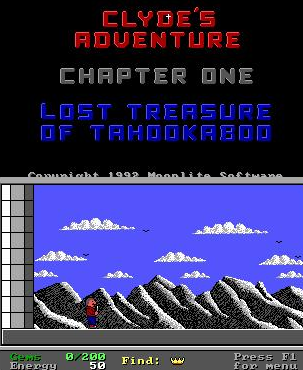 Clyde's Adventure is a platform computer game released by Moonlite Software in 1992. The objective of the game is to explore castles, collect gems, and find the exit. Clyde, the main character, has a supply of energy that depletes whenever he walks, jumps, or falls from a great height. If his energy reaches 0, it causes Clyde to die with a shriek. With no "enemies," Clyde's Adventure is predominantly a puzzle game. The challenge comes from avoiding traps, using Clyde's magic wand to manipulate the environment, and finding the most efficient route before Clyde runs out of energy.

The game has two chapters, each containing 16 castles:

Originally, Episode 1 was shareware, while Episode 2 was available only upon registration. Moonlite software has since released the entire game as freeware.

Clyde's Revenge is a sequel to this game.