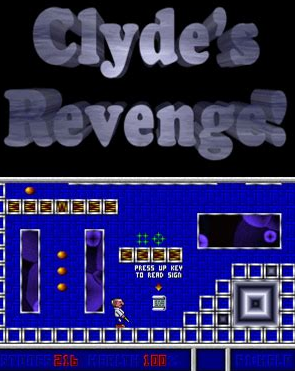 Clyde's Revenge is a platform computer game released by Moonlite Software in 1995. It is the sequel to Clyde's Adventure. The objective is to explore castles and collect all the stones. With no "enemies," Clyde's Revenge is predominantly a puzzle game. The challenge comes from avoiding traps and using Clyde's magic wand to manipulate the environment. The game has four episodes.

Originally, episode one was shareware, while the other episodes were available only upon registration. Moonlite Software has since released the entire game as freeware.