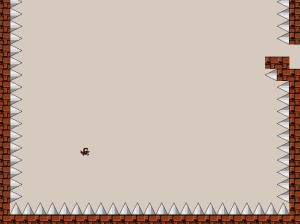 A popular variety of Fake Difficulty, Trial-and-Error Gameplay is what happens when an incorrect action kills the character, ends the mission in failure, or otherwise forces the player to replay that part from the beginning again. And, in the most egregious manner possible, this happens even if it was not possible to know in advance that it was a bad move at all. In the end, the only thing the player can do about it is reload the area and/or savepoint, play through that section again, and remember not to take that action next time. In essence, Trial-and-Error Gameplay is whenever it is almost guaranteed for the player to fail several times before realizing what is necessary to succeed.

This is not limited to Nintendo Hard games. It does not necessarily result from Everything Trying to Kill You. Even ordinary games can abuse the non-permanence of death. If it affects the game's plot, it may also challenge the Willing Suspension of Disbelief and Character Development, because when the game's protagonist finally breaks through, in-universe it looks like he just knew what was coming. It can feel much worse in games that have set pieces, voice acting, or (heaven forbid) unskippable cutscenes that do/say/show the exact same thing every time like a skipping record playing a song you can't get out of your head.

Take heart. As annoying as this trope can be, it's far better than the game becoming Unwinnable.

Ron Gilbert of LucasArts fame rants about this trend here,

and intentionally designed his games to avoid this trope (co-worker David Fox added that, unlike adventure games, "I know that in the real world I can successfully pick up a broken piece of mirror without dying"). Others who've decried the trend include this IGN blogger

Also known as 'Curse You Sierra', a lament directed toward the company most prone to putting such puzzles in their games. Save early, save often, and don't overwrite saves.

Amusingly, in Edutainment Games or Puzzle games, trial and error may actually be the puzzle itself. These count, but barely, because you may not be punished for getting it wrong; since the entire point is Trial and Error until you get the solution right. There are also in fact entire games dedicated around this concept too, although to be fair, these games generally tend to give you clues after you make an incorrect guess. Generally speaking, games based around this will generally have the "Trials" be the player learning how the game pieces work and interact with one another - and as a result, it does not take a lot of time to try again if you fail. Often these test skills such as recognising patterns and testing a hypothesis. This goes to show that Tropes Are Tools - it can be made fair, it's just generally difficult.

This is much worse when combined with Check-Point Starvation. That said, it is possible to reduce the difficulty by watching and closely studying YouTube videos of it being done right. Or wrong.

Compare Try Everything and Character Select Forcing. This trope is ubiquitous in "Groundhog Day" Loop stories.