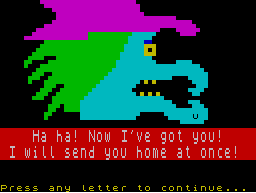 And your little dog too!
Advertisement:

A 1983 Edutainment Game by 4Mation for the BBC Micro, Granny's Garden was most commonly played in British primary schools up until the early 1990s. The BBC Micro is gone from the classroom, but 4Mation is still around, and so developed updated versions of the game for Windows and macOS X to use. (There was also an updated version for the Acorn Archimedes, the successor to the BBC Micro.)

The story is very simple. You are visiting your grandmother whose garden contains a magic tree. Upon your finding it, the tree transports you to the Kingdom of the Mountains, where the king and queen have been locked away by a Wicked Witch who kidnapped all of their children. It is up to the player, with the assistance of a magical raven, to return all six children to their family.