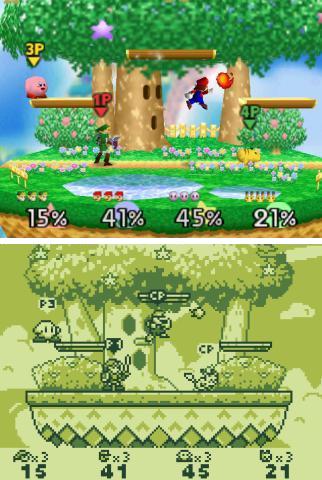 The polar opposite of a Video Game Remake. While a remake strives to offer an updated version of the game, both from a technical and a gameplay standpoint, a demake is purposefully built as an interpretation of how the game may have been, were it conceived and produced during a previous hardware or software generation. This means simpler graphics and sound, and simplified gameplay although the basics are mostly kept, often translated from 3D to 2D. It is often a Self-Imposed Challenge for the creators, who try to work with as few resources as programmers had back in the old days - some even program the demakes on the original old hardware, to produce newer games with a Nostalgia Filter. It's also interesting to try seeing if newer mechanics can work in less technically advanced games.

Due to their nature of being based on copyrighted material, demakes are usually fan-made and freeware. This hasn’t saved a few from getting Cease & Desist letters. There are also the Chinese bootleg NES ports, with varying degrees of quality. The rise of Retro Gaming, however, has made some official productions appear. Beside real and playable games, there are artists who have fun creating mock-up pictures of demade games, often taking the original resolution and palette limitations of old gaming machines into account.

Due to its simplicity, Flappy Bird is one of the most backported games of all time. This doesn't even cover half of the demakes and ports that exist.

Due to its simplicity, Flappy Bird is one of the most backported games of all time. This doesn't even cover half of the demakes and ports that exist.