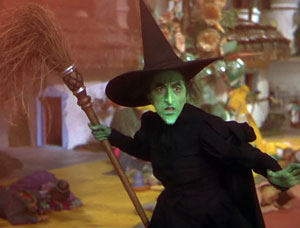 I'll get you, my pretty — And Your Little Dog, Too! AHAHAHAHAHAHAHAHA!
"Let all Oz be agreed / I'm wicked through and through
Since I can not succeed / Fiyero, saving you
I promise no good deed / Will I attempt to do again / Ever again"
— Elphaba, Wicked
Advertisement:

Welcome to the dark side of the classic witch, step lightly or you may get eaten.

The wicked witch archetype is a classic staple of Fairy Tales everywhere. It used to be that just about every witch was wicked, and if a non-evil female magic user appeared in folklore, she'd be referred to with a term like "sorceress" or "fairy godmother" instead, but in modern times that's not always the case. A lot of the trappings of a wicked witch are shared by her good or neutral counterpart the Witch Classic, such as Broomstick riding and wearing pointy hats. Still there are some red flags to watch out for to decide if the witch you're dealing with is good or may in fact be wicked.

It's likely that every witch in existence will be this trope in a setting where Magic Is Evil. There might also be some overlap with the Wicked Stepmother and the Evil Matriarch; however, royalty tends to be beautiful. In settings tending more towards Magic Realism than typical fantasy worlds, their magical powers will be downplayed, but their prophecies will have a bad habit of coming horribly true, especially if they get insulted or snubbed.

It's also worth noting that many aspects of the wicked witch (an old woman in mourning black, living alone, loves children, has a cat) are perfectly ordinary things you might expect from a widowed older woman, twisted to make them sound evil. The origins of the wicked witch herself are most likely a way to vilify women that certain people thought were leading immoral lives, or wanted to take advantage of.

Compare Evil Sorceress of which this tends to be a more 'earthy' version.