Literature / The Forgotten Beasts of Eld 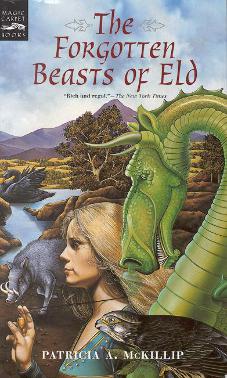 ...her eyes curved slightly in a smile. "Go home to your world of the living, Coren. That is where you belong. I can take care of myself."
"Perhaps." He gathered the reins in his hands, turned his mount toward the road that wound downward to Mondor. Then he looked back at her, his eyes the color of clear mountain water. "But one day you will find out how good it is to have someone who chooses to come when you call."

The Forgotten Beasts of Eld is a 1974 World Fantasy Award-winning novel by Patricia A. McKillip; the very first book to win that award. It was her breakout novel. The story has a fairy-tale-like quality, but, as usual with McKillip's works, the myths and legends mentioned in the story are almost entirely her own invention.

The beautiful young sorceress Sybel (child of the Wizard Ogam and a noblewoman he called with magic) lives on a remote mountain deep in the Eldwold. With both her parents dead, Sybel knows little of the world of mankind; she keeps company with the collection of magical beasts started by her grandfather, which includes the wise boar Cyrin, the Black Swan of Tirlith, the spell-casting black cat Moriah, the dragon Gyld, and many more. With her powerful magic, Sybel seeks little but to expand her collection, calling beasts out of legend to join her on Eld mountain.

One day a frightened man, Coren of Sirle, shows up on Sybel's mountain with a baby. The baby, Tamlorn, is a possible heir to the throne, and being hunted by the King. He is also a cousin of Sybel's, on her mother's side, so, although she has no experience with or interest in children, she reluctantly agrees to keep him safe, and soon comes to love him as she loves her beasts. Then, when Tam is twelve years old, Coren reappears. Sybel may be drawn into the affairs of mankind after all.