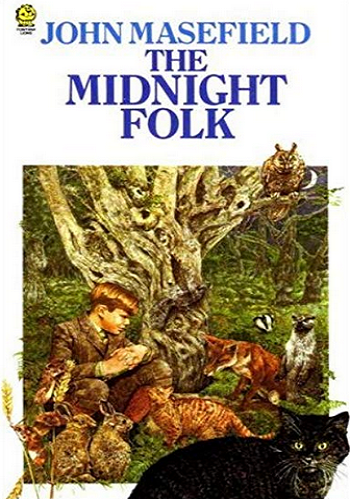 The Midnight Folk is a children's fantasy novel by John Masefield, first published in 1927.
Advertisement:

Young Kay Harker has a variety of adventures in search of the truth about a famous treasure that his great-grandfather, a merchant captain, was given for safe-keeping then lost when his crew mutinied. He is aided in his quest by the Midnight Folk, an association of Talking Animals, Living Toys, and other fantastic creatures.

But not all the creatures that haunt the night are friendly: a coven of witches is also after the treasure, led by the scheming Abner Brown and the sinister Mrs Pouncer, and woe betide anyone who gets in their way.

A sequel, The Box of Delights, was published in 1935. The two books also have links, in terms of shared settings and characters, with a series of adventure stories for adults which began with Sard Harker in 1925.