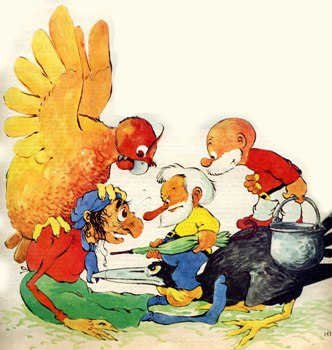 Paulus de Boskabouter was a Dutch comic strip, drawn by Jean Dulieu (pseudonym of Jan van Oort), from 1946 to 1984. As with most Dutch comic strip series from the mid 20th century it was published without text balloons. The text could be read below the images.

The series tell the adventures of a wood gnome, Paulus, who lives in the forest and has frequent interactions with his animal friends Oehoeboeroe the owl, Salomo the raven and Gregorius the badger. His Arch-Enemy is Eucalypta the witch, who has a sidekick baby chick named Krakras.

The series were very popular with children and became a Cash Cow Franchise spawning both books, a radio show and a TV puppet series. Most impressive of all is that Dulieu almost did everything himself: the comics, the stories, even the voices and puppets for the radio and TV series.

Paulus De Boskabouter has been translated in many languages, including German, English, Swedish, South African (Afrikaans), Indonesian and Japanese.