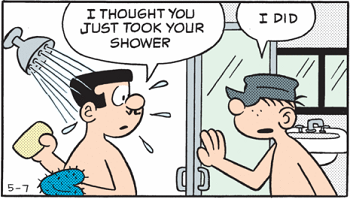 "She doesn't 'just wear a hat'. She always wears a hat."
— Becky’s description of Dina, Dumbing of Age
Advertisement:

A character always appears wearing a headdress of some kind, and never, ever takes it off. It doesn't have to be a hat, any kind of headgear is fine. Furthermore, it doesn't always have to be the same headgear, the point is that this character is never seen bare-headed. This gives him a certain mystique since while it might just be that he wears the hat because he feels like it, the fact remains that we never learn what his hatless head looks like.

Please note that this is not about characters who usually wear a hat. It's for characters who always and without exceptions wear one. Maybe exceptions can be made if the character is seen hatless just once, but no more than that, or if it happens very rarely and is made a big deal of. A good rule of thumb is that if it doesn't seem weird, when you think about it, that the character in question always wears headgear, then s/he doesn't qualify. So obviously a character that appears briefly in two episodes of a three-hundred-episode series doesn't qualify, even if his fedora was on all the time.

In some cultures, a hat is a mandatory article of clothing — something you would no more leave off than you would leave off wearing pants. This may be required for only one sex, or for both.