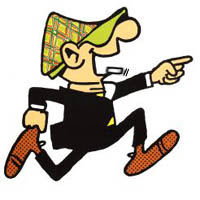 Andy Capp is a British comic strip set in Hartlepool, created by Reg Smythe in 1957 for the London Daily Mirror. It also was syndicated in the United States by Creators Syndicate, starting in 1963.

In its early days, the Andy Capp strip was accused of perpetuating stereotypes about Britain's Northerners, who are seen in other parts of England as chronically unemployed, dividing their time between the living room couch and the neighborhood pub, with a few hours set aside for fistfights at soccer games. Even his name is a perfect phonetic rendition of that region's pronunciation of the word "handicap" (which the cartoonist chose because a handicap is exactly what Andy is to his hard-working wife, Flo). But Smythe, himself a native of that region, had nothing but affection for his good-for-nothing protagonist, a fact which showed in his work. Since the very beginning, Andy has been immensely popular among the people he supposedly skewers. (Maybe the comic should be criticised for glorifying such negative behavior instead.)

By the way, Smythe claimed he modeled his main characters after his own parents. But it seems unlikely that his father, who built boats for a living, could possibly have been very much like Andy, or his family would have starved. It's also been suggested that Andy Capp owes something to Ally Sloper, Britain's first successful comics character, also a lovable lowlife.

The first British paperback reprints of the strip appeared in 1958, and American reprints started in the early 1960s. In both countries, the volumes now number in the dozens. Andy has also been the star of a minor TV series; its six episodes featured James Bolam in the title role and Paula Tilbrook as Flo, and were aired by ITV in 1988. It's arguable that the series died a death because it was trying to be a three-dimensional comic strip rather than a conventional Sitcom.

The strip even had a spin-off of sorts in 1960, Fleetway Publications, which was owned by The Mirror, launched a successful comic book titled Buster, whose main character was supposedly Andy Capp's son (though this family connection was never mentioned in the strip itself and was later forgotten in the comic book as well). Andy was even animated once, when he crossed over with Family Guy in the episode "And the Wiener Is...", which first aired on August 8, 2001.

Reg Smythe wrote and drew Andy Capp, both daily and Sunday, until his death in 1998. Since then, the strip has been continued by unnamed successors, though for years, Smythe's signature remained affixed to it. Since November 2004, it's been signed by Roger Mahoney and Roger Kettle. It now appears in over 1,400 newspapers worldwide — not quite in the range of top strips like Peanuts, Blondie, Hägar the Horrible and Garfield, but well ahead of B.C., Dennis the Menace (US), FoxTrot and other very successful comics.

And it's translated into 13 different languages, proving that Andy's appeal goes far beyond the minor regional stereotype he supposedly represents.

He is also the mascot for a line of snack foods.