Comic Strip / Dennis the Menace (US) 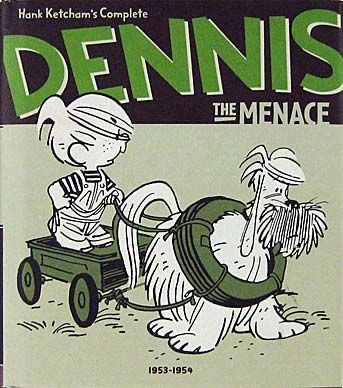 Dennis and his dog, Ruff.
Advertisement:

Dennis the Menace is a long-running newspaper comic, created by Hank Ketcham, that first appeared in March 1951. It features the adventures of mischievous "five-an'-a-half"-year-old blond boy Dennis Mitchell, often at the expense of his parents, Henry and Alice, or his neighbor, Mr. Wilson.

It has inspired a live-action series, an animated Saturday Morning Series, and a few live-action films.

Dennis was also the mascot of Dairy Queen from 1971 to 2001. DQ dropped him because they felt children didn't relate to him anymore.

Dennis had his own comic book series for a time. In them, Dennis was depicted as just a normal small boy, realistically thoughtless and reckless for his age. His status as a "menace" was entirely due to the unforeseen consequences of his adventures and Dennis was usually responsible and mature enough to own up when he realised he'd done something wrong.

In the comic books, Dennis was occasionally the victim of his own menacing, such as the time his father accidentally gives him $10 instead of $1 (in the 1960s when money was worth a lot more) to buy food at a food fair and Dennis spends it all. As such, he got a massive stomach ache.

Not to be confused with the British comic book character also called Dennis the Menace, who stars in a completely different and unrelated eponymous strip which also coincidentally debuted in March of 1951. In Britain, the cartoon and film based on this comic is thus simply called Dennis!.

The comic strip provides examples of: