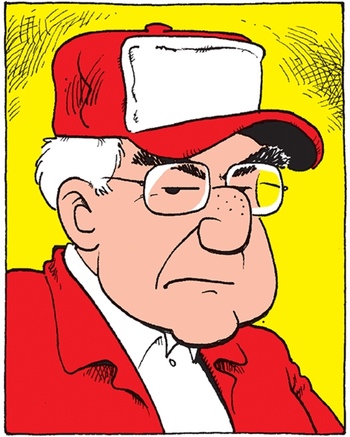 Crankshaft, a Newspaper Comic strip launched in 1987, is a Spin-Off of Tom Batiuk's Funky Winkerbean that focuses on the day-to-day life of its title character, curmurdgeonly eighty-five-year-old bus driver Ed Crankshaft.

Much like its parent, the strip combines character-based humor (radically different from its parent comic, although this was made at the time before Cerebus Syndrome had kicked in) with story lines about issues that affect average Americans. It should also be noted that, since the title character and many others are over eighty years of age, much use is made of the same flashback device the parent strip does.