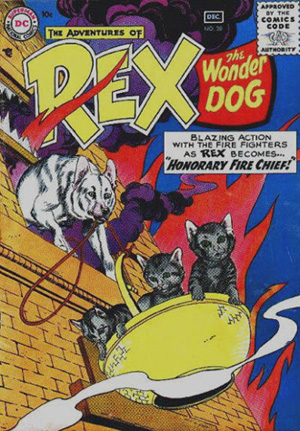 saves the day (and the kittens).
Advertisement:

They say that dogs are man's best friend, and some dogs go above and beyond simple loyalty and become full-blown heroes. They protect those in need, right wrongs, and become crusaders for justice good enough to stand toe-to-toe with their human counterparts.

These are usually found in relatively realistic settings, and the dogs are not Funny Animals (with a few exceptions, see below). Depending on the medium and capability of the work in question, though, the audience may hear the dogs talk, or have some insight into the dogs' internal monologue. In the absence of any sort of character development for the dog, which is difficult to do in live-action, they will often be surrounded by several human characters.

Judging by the list of Real Life examples, this seems to be Truth in Television (and that also makes dogs a Crowning Species Of Awesome). Given humanity's talent for getting into trouble, it's certainly nice to know that at least one other species has got our back.

Many fictional portrayals of Tanuki often fall into this trope, albeit of Guile Hero territory. Given they are in the dog family, this is quite related.

Often needs to rescue Timmy in a Well, and may be an Angry Guard Dog. A cousin to the Evil-Detecting Dog, and something of an inversion of Dogs Are Dumb. May or may not be a Gratuitous Animal Sidekick or Action Pet. A particularly badass way to be an heroic canine is Sled Dogs Through the Snow. For a more subtle dog hero, see Hachikō and for a close cousin of this trope, see Noble Wolf. See also Heroes Love Dogs. This is the Heroic Canine in the contrasting looks of Heroic Canines, Villainous Felines.

Contrast with various villainous dogs such as the Hellhound and the Bully Bulldog. And Cunning Like a Fox, another (usually) villainous canine counterpart. If you have a Post-Apocalyptic Dog with you, it might be heroic or evil.