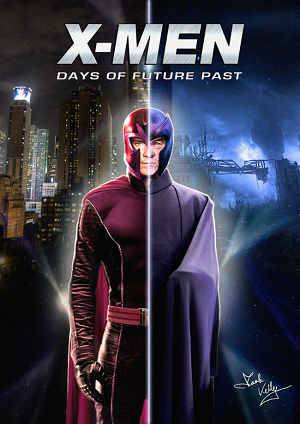 The future ain't what it used to be.
Image by Mark Kelly

"And now the wheels of heaven stop
You feel the devil's riding crop
Get ready for the future:
It is murder."
— Leonard Cohen, "The Future"
Advertisement:

A Bad Future is one of the most common Alternate Timelines and one, who if Time Travel exist in their universe, any stars of a long-running series will surely visit. The heroes are sent into the near future (common intervals are 5, 10, and 20 years), and discover a Crapsack World. Usually the villain(s) have taken over. They may even encounter themselves. 90% of the time the hero(es) will meet La Résistance and/or Future Badass versions of his friends who were left in the past. Typically they go back in time to Set Right What Once Went Wrong.

Conveniently, in many cases the catalyst that ruined the world was the absence of whoever was sent to the future. Thus all the heroes have to do to fix things is return to the present.

Technically Dystopian, but doesn't fit that trope description well as it's usually ascribable to a single villain-related event. It's a good (or cheap, depending on the execution) way of becoming Darker and Edgier and adding tension while working under Status Quo Is God. If a series gives only a brief glimpse of the Bad Future instead of actually going there, it may be Storyboarding the Apocalypse.

If this happens to a character from the past to "our" future, then they've entered a Bad Present. If the reason the bad future is so bad is because The Bad Guy Wins, it's a Villain World. Sometimes the characters find out about the Bad Future via an Ominous Message from the Future rather than Time Travelling themselves.

Good Future variations are practically unknown, since knowing that the future is going to turn out okay removes any dire need for the characters to change things in the present. They do sometimes appear as an epilogue to show that the heroes did in fact succeed in changing the future.

Compare with Future Me Scares Me, Dark World, Techno Dystopia, It's a Wonderful Plot and Mirror Universe.