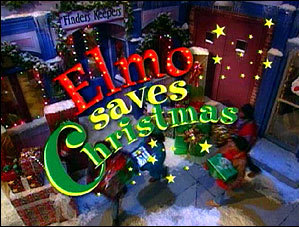 Didn't Elmo ever tell you about how he saved Christmas then almost lost it?

Elmo Saves Christmas is a Direct-to-Video Sesame Street Christmas special, released by Sony Wonder in 1996. Maya Angelou tells the story of how Elmo saved Christmas to Telly and Zoe, after they wish it were Christmas every day.

When Elmo saves Santa from getting stuck in a chimney, the former is rewarded with a magic snowglobe that will grant three wishes. Elmo decides to wish it were Christmas every day, because What Could Possibly Go Wrong? Santa, chagrined at seeing the magic wasted, sends Elmo on a time-traveling reindeer named Lightning to see how his wish would play out over a year. It goes From Bad to Worse from there. Luckily, this is Sesame Street, so everything works out in the end.

Tropes for this special include: