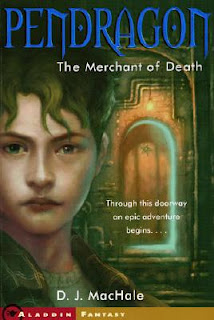 "This is the way it was meant to be."
Advertisement:

Each book is divided into two viewpoints. The journal segments, detailing the adventures of Bobby Pendragon, the main character, who is whisked away from his Ordinary High-School Student life by his Uncle Press, via a magical gate called a flume hidden in the subway systems of New York City. The other part follows Bobby's best friends, Mark and Courtney, who get into a bit of trouble themselves, despite lacking the ability to travel to alternate worlds. (The only book that doesn't use this formula is The Soldiers of Halla, which consists entirely of one journal written by Bobby.)

Each world is called a territory, and every territory has a Traveler, filling various roles. Every territory is reaching a turning point, which will radically alter the fate of that world. The Travelers exist to make sure that the turning points, and the destiny of the territories, go the way they naturally would, without outside interference. Obviously, if this was all there was to it, it'd be pretty uneventful. Enter Saint Dane, who wants to push the territories towards chaos, destroying the barriers between them, so he can reshape Halla (everything that has existed, does exist, and ever will exist) in his image. The series consists of 10 books, with the final book released May 12, 2009.

The series' books include:

In addition to the main series, there is also a trio of prequels, Pendragon: Before the War, showing what happened to the nine other Travelers besides Bobby before their journey began; a Guide to the Territories of Halla Volume 1, with no Volume 2 in sight; and a graphic novel version of The Merchant of Death. And the obsessive reference-spotters will note that MacHale's movie Tower of Terror along with his Morpheus Road series take place in the same continuity.