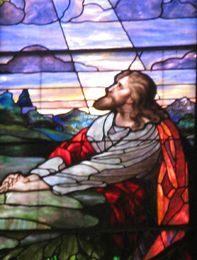 are a natural phenomenon in which sunlight appears to burst through clouds in distinct beams.

◊ They are known by many names, often religious ones like the "fingers of God", "Jesus rays", or "Jacob's Ladder" in reference to Jacob's famous dream from Genesis 28:12, where he dreamed of a stairway to Heaven.

The symbolism is easy to decipher, with light used because Light Is Good and light from the sky used because the sky is associated with God, as per Heaven Above.

In fiction, this shows glory at the Awesome Moment of Crowning, beauty in The Promised Land, and hope shining during the Darkest Hour. This is a very common device in religious artwork since it can show the glory of God or a heaven without having to draw them, which might be forbidden, impossible, or simply hard to pull off. It can overlap with Cue the Sun.

Natural Spotlight is a related trope for when the rays highlight an object specifically, rather than just being symbolic. Subtrope to Empathic Environment. Contrast with Gray Rain of Depression and Battle in the Rain. Compare Beam of Enlightenment.