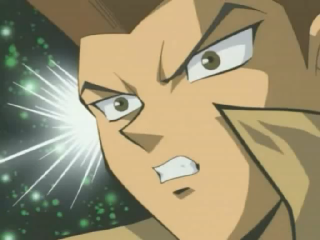 A commonly used device when the character gets a moment of clarity, shock, or insight: what looks like a laser or a lightning bolt on a black background will shoot behind their heads. Used to emphasize the urgency or impact of what the character has just realized.

The Idea Bulb is a similar convention in Western media. Alertness Blink also has a lot in common with this trope.

Not to be confused with the similar Thunder Shock, which expresses, well, shock.