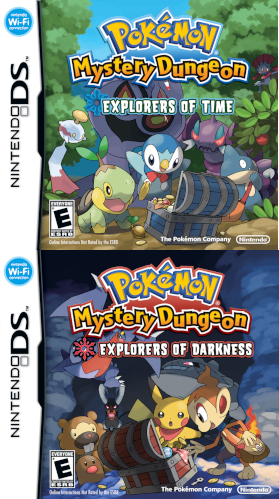 Things are about to get dark. And timey-wimey.
"Welcome to a grand tale! A tale that spans time... And darkness. It's the dawn of epic exploration!"
— Time/Darkness introduction
Advertisement:

Similar to the first installment, the player wakes up in a world inhabited solely by Pokémon, this time washing ashore of a small village called Treasure Town after a storm, with no memories of what happened to them or how/why they've been transformed from a human into a Pokémon. They befriend a timid young Pokémon with a mysterious artifact and together join the local Wigglytuff Guild to train as an exploration team, exploring the strange, randomly generated "mystery dungeons" that have been showing up in various regions lately. Along the way they learn that a mysterious Pokémon has been reported stealing very important artifacts called "Time Gears," and ultimately get swept up in a quest to Save the World before time itself grinds to a halt.

The story becomes much more serious than those of the game's predecessors, and has several considerably dark moments in its later chapters.

The games were followed up by an Updated Re-release called Explorers of Sky in 2009. Outside of some minor balance changes, Sky also features Special Episodes focusing on members of the Wigglytuff Guild, the Spinda Juice Bar, and a couple new sidequests.

This installment provides examples of:

The quiz that determines which Pokemon your main character becomes. (Footage provided by komali100 on Youtube.)

The quiz that determines which Pokemon your main character becomes. (Footage provided by komali100 on Youtube.)