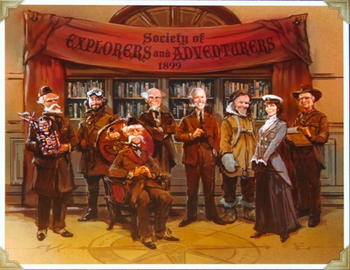 This is where you'll find the Lady of Adventure, Adventurer Archaeologist, Great White Hunter and Gentleman Adventurer all hanging out when they aren't out doing dangerous things. There's probably a bar, a roaring fireplace, and lots of easy chairs for people to sit around in. Expect animal heads and African masks hanging on the walls in terms of décor, as well as lots of globes and maps. (Possibly a library full of them.) Often the site of a Framing Story, with one person sharing stories about his latest adventure and the others listening. Especially common in works set in the Victorian or Edwardian eras or a Steampunk universe, but they can be found elsewhere.

May overlap with Adventure Guild.