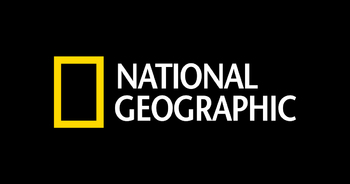 The National Geographic Society is one of the largest non-profit scientific and educational institutions in the world. Its magazine publication and TV channel cover a wide range of topics, including geography, archaeology, natural science, anthropology and technology. The institution is known to strongly promote environmental and historical conservation, and the study and appreciation of culture from all over the globe. The National Geographic Society’s logo is a yellow rectangular portrait frame, which appears as margins on the front covers of its magazines and as its television channel logo.

The magazine is the Trope Namer for National Geographic Nudity.

Tropes in National Geographic include: