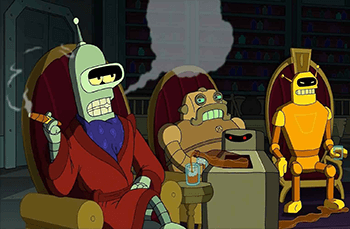 The native habitat of the Blue Blood, these social groups are secretive, mysterious and ruthlessly exclusive. Expect to see a lot of besuited, bemonocled old white men, reclining with snifters of brandy in red studded-leather armchairs, smoking cigars or pipes.

Malicious versions of these clubs tend to feature evil aristocrats, or corrupt corporate executives, all pulling the strings of society for their own benefit.

Alternatively, they're just a Brotherhood of Funny Hats, where upper-class men can be out from under the feet of their wives. Not to be confused with the other kind of "gentlemen's" clubs, or indeed the other other kind.

Clubs like this generally seem to be named according to similar rules to a Mad Lib Thriller Title; "The [esoteric noun or Classical name] Club".