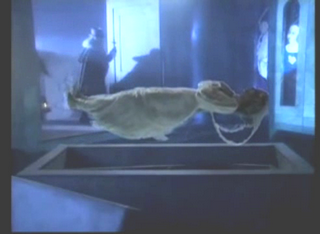 Dracula Unleashed was a Full Motion Video game developed by ICOM Simulations and released in 1993. It acts as a sequel to the story Dracula, taking place several years after the book's events. You play as Alexander Morris, a brother of Quincey Morris, who comes to London to find out about Quincey's death and wed his sweetheart Annisette Bowen.

However, strange murders soon start happening around town and Alexander realizes it's linked to his brother's death. Now he must get to the bottom of what's going on before his friends and loved ones are put in danger.

The game was pretty much trial and error, as you were required to move around the city under a strict time limit and visit different areas to gain information while in others you needed certain items on hand to move on. Failure to have such at a crucial moment would lead into death. To say the least, this is one of those games where you really have to pay attention. Still, it helps that the acting (like pretty much all FMV games) was very hammy.

Was re-released in 2002 as a DVD game with updated visuals and special features.